What Does Carp Eat? All You Want to Know!

The freshwater fish - carp is popular among seasoned anglers...

It has a characteristic fishy flavor, which is liked by many people across the world. But mostly this type of fish is caught only for enjoyment.

Carp comes in many varieties and different names are given to species found in Europe, America and Asia. Rohu is a popular type of carp mostly found in Indian waters and it is one of the most widely used fish in this part of the world.

Many people catch carp not for eating but just for recreational purpose. They use catch and release fishing tactic to catch a particular type of fish and then unhook it to return it back to the water. However, this type of practice requires skill and only experienced fishermen can do it.

Before catching carp the most common question any beginner and expert would ask is what does the fish eat. Common carp eats aggressively when the water temperature is above 18-20 degrees Celsius. This is a great news for fishermen because any fish that is fond of feeding is normally an easy catch.

However, because of its big size, this type of fish is a strong fighter on the rod and therefore gives a tough time to anglers. Grass carp feeds on vegetarian diet and hence the name "grass".

In this post, we will touch upon various topics related to carp eating habits. There is also a breakdown of bait choices for different types of carp. 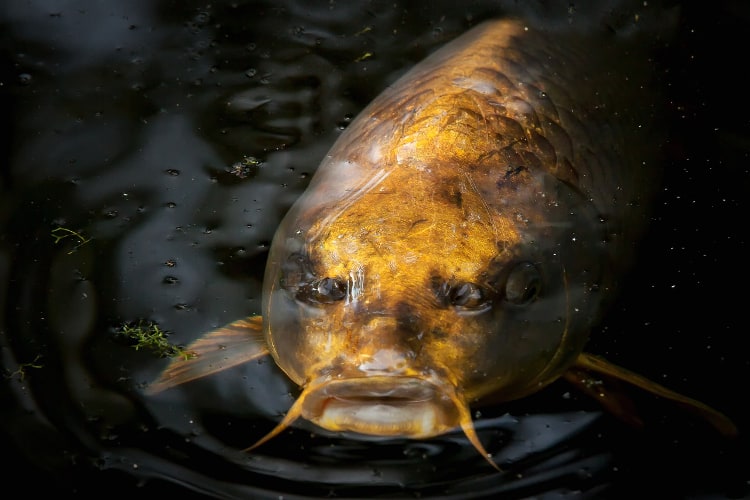 Where Does Carp Feed?

Where does carp feed largely depends on its size. It has been observed that smaller carp do not hesitate to feed on bottom but bigger ones are more cautious when it comes to choosing a feeding location.

During the winter months, carp would move to shallow depths because in these locations the water is warmer.

As a rule of thumb, remember that carp usually look for areas with greater oxygen concentration and those that are considered safer and more sheltered. If any of these conditions is short, carp would definitely move to those locations for feeding.

Big and heavy carp feed everyday; in fact, many times during a day in order to maintain their huge weight. Yet it is difficult to catch these big carp and therefore no matter where you're fishing, you will need time and patience to be able to catch carp.

Fishermen find out about the favorite bait of different species of carp by chucking out a good sized meal in the sides and then coming back later during the week to see if it has been consumed.

If you want to know how to catch carp, you will have to read the tips for carp fishing that include some basic information on the type of gear to use as well as locations where carp could be found.

What Does Carp Eat in the Wild?

Although carp is a fighter on the hook, the good news is it eats a large variety of foods that can be used as bait. Common carp is omnivorous, which means it feeds not only on small insects and other creatures but also eats plant matter, such as algae. Since all these are natural food sources, fishermen may use just about any kind of bait ranging from boilies to groundbait made from natural or artificial ingredients.

The food items that carp favors include;

There are some foods that anglers not use very often but they are also popular among all species of carp. These include;

So, you can imagine there are practically unlimited choices when it comes to choosing the best bait for carp.

It is usually advisable to try and experiment with different options to see which one works best under specific conditions.

How Much Food Does Carp Eat?

Carp is an aggressive eater and some anglers have reported that it would consume around 40 medium-sized boilies within a few minutes. So, yes you're going to need a lot of food especially if you're trying to catch big carp. As a general rule of thumb, remember that any fish would feed on food about 2% of its body weight. So, if a carp weighs about 10 pounds, it would need three ounces of food on a daily basis.

Some anglers are of the opinion that every carp needs about 12g of protein for every kg of their body weight. This accounts for about 40% protein in a carp's diet. They will try to fulfill this requirement by feeding on different types of foods including meat and plants. As such, most carp are omnivorous and they also adjust quickly to anything new that comes their way. For example, for a long time it had been thought that grass carp feeds only on plants but when it was given a chance to consume fish eggs and larvae, it didn't hesitate.

What is the Best Bait to Use to Catch Carp?

Using a baited hook is the best and most effective way to catch carp. When it comes to choosing the best bait for a particular type of fish, there are hundreds of options to explore. Fishermen experiment with all kinds of choices from artificial insects and garden worms to minnows and chunks of raw fish to lure the fish they are trying to catch. Unless you're trying to catch grass carp, you can use just about anything for the bait including grasshoppers and dog food.

Here is a summary of best bait to use for different carp species;

Common carp would be attracted to just about anything but the best bait for this type of carp is boilies, mollusks and artificial corn. It is also recommended to add a little salt to any type of bait to make it more attractive.

Grass carp would feed on vegetation most of the time but conventional bait is also used sometimes. The best options include corn and bread dough, cherry tomatoes and lime beans. Since grass carp is getting increasingly popular among anglers, many people ask how to catch BIG grass carp.

It has been observed that mirror carp loves to feed on earthworms. But other types of bait can also be used including corn floaties and bread. Some fishermen add spices to their bait especially in the winter season to attract big carp.

You can use corn as bait for any species of carp particularly leather carp as these fish simply love corn. You may also consider ready-made boilies available on the market.

Like grass carp, ghost carp would mostly feed on vegetable matter but insects are also one of their preferred foods. Fish eggs are also something they enjoy along with crawfish and benthic worms.

There are other types of carp as well but they also mostly prefer anything that contains protein and is tasty and sometimes salty. Different bait options are used for summer and winter months and according to the conditions.

What Does Carp Eat in Summer and Winter?

Carp becomes sluggish and inactive in the winter. This is because its metabolic rate decreases as the temperature of the water drops. As a result, it doesn't feed very actively.

However, you may still lure it using its favorite diet choosing from the best options discussed above. Corn is one option for bait that is sure to work both in summer and winter. Aquatic worms is another option you can try along with boilies, meat baits, watermelon, and peanuts.

However, different techniques are required to be able to use these bait choices to your benefit. Small insects, for example are difficult to handle.

Fishing experience can be made more enjoyable by adjusting your tactics according to the eating habits of a particular type of fish.

Many people are curious about what carp feeds on because it is considered a difficult catch especially during the winter months. However, when the conditions are good big carp would feed strongly and usually in a manner termed as "greedy" by some anglers. That gives fishermen an edge when it comes to catching carp but it also depends on the right choice of bait. This means choosing something the fish would be instantly attracted to and using it in adequate quantity.

Consider the options discussed in this post to prepare something at home that also appears to be unique and delicious. Once you know what carp likes to eat and where does it mostly feed, you are all good to go. 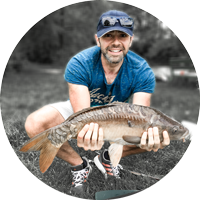 This site is owned and operated by Sina P. (Slo-fishing). We are a participant in the Amazon Services LLC Associates Program, an affiliate advertising program designed to provide a means for sites to earn advertising fees by advertising and linking to Amazon.com.