7 Reasons Why do Fish Jump Out of the Water

Have you ever seen the fish jump out of water? At beaches, lakes, rivers etc.

Have you ever thought about it? You know it very well, Human beings are curious by nature. They want to know it all.

There are some obvious reasons. But believe me, there are many scientific reasons too.

Some experts in this field (including marine biologists) have researched this topic. They have some convincing answers. Moreover, there are many keen observers of nature. Do you think scientists have been able to gain some knowledge from their fishing trips?

I hope you would be eager to know all those reasons for fish jump out of water.

I am going to list out those reasons for you to feed your curiosity. Let us together try to understand this strange behaviour of jumping fish.

Why do fish jump Out of the water!? I have added a bit of my personal opinion as well ...

Are you tired of reading the same fishing information? Get our FREE fishing e-book where you will find PRO Tips: 10 Deadly Sins [Mistakes] of Fishing.

Reason #1 – To dodge the predators

On our planet earth, there is a basic concept among all the living creatures. The hunter hunts. The predator is always on a lookout for prey. The bigger fish eat the smaller fish. All the creatures have an instinct to save themselves from their predators. It is a basic concept of any food chain. If a prey stops protecting itself, the whole food chain will crumble.

Fish are an important part of food chains in marine life. The evolutionary race between the predators and the preys goes on. You need to understand that the fish would do everything to protect itself from their predators. It is a serious business for them.

But this "cat and mouse" chase are not always on.

The predatory fish is not always on a lookout to eat other fish. Usually, the fish try to eat the other fish at a certain time of the day or when they are hungry.

Mostly, the attacks by them are not long-distance chases. They are almost always sudden attacks. They take the element of surprise in their attacks. The prey tries to save itself by their natural reflexes. There is a high chance of survival if they move out of their way well in time. The fish tend to stay in groups, small to very big ones. The school of fish have a group strategy to save them from the predators. 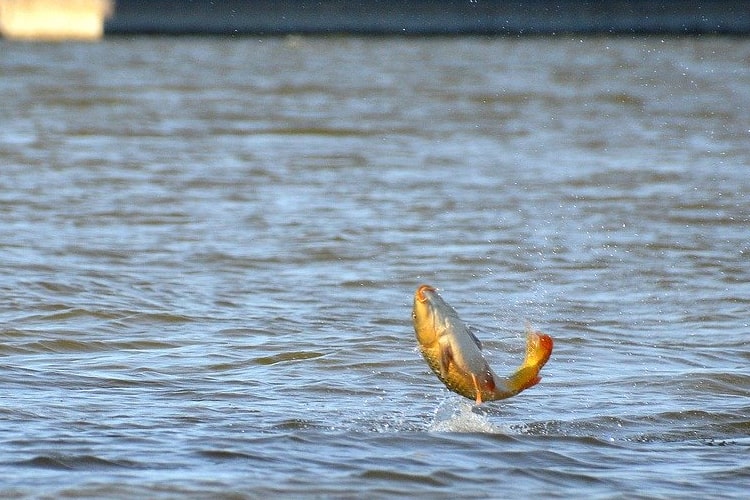 Food is the primary motivator for extraordinary feats and strategies in many creatures. Fish are no exception.

The food here is not inside the water. But it is hanging in the air just above the water surface, or flying around. To eat such food, the fish may employ alternative strategies.

Have you seen bass leaping out of the water to catch dragonflies?

The low flying flies are easy targets for them. The most amazing jump goes to the credit of Monkey fish found in the Amazon basin. They have a unique ability to jump out of the water to catch their prey. The shape of their mouth has evolved in such a way that they help them easily catch the potential prey. Their prey includes insects, birds, bats, crustaceans etc.

The silver Arowana catches the insects perching on a tree branch or a leaf. The distance could be about a metre above the water surface. You might have seen such footage in the documentaries.

Some species of fish jump out of water for no reason. They do so from time to time. Some keen biologists have observed the behaviour and theorised that they do so to get rid of external parasites.

You know that a fish cannot get rid of any pesky parasite by just using its mouth or fins. As a last resort, they jump out of water due to sheer desperation.

So, next time if you observe a fish leaping out of water for no apparent reason, then it must be a debugging process to get rid of unwanted and irritating parasites.

If it is a matter of survival, the instinct can do anything. If the environment has deteriorated, they have no choice but leap out for something. Some of the fish have evolved themselves to look for better living conditions outside water. Yes, you got it right. They are on a lookout for a breathing space – i.e. oxygen.

African sharp-toothed Catfish has evolved her lungs to be able to breathe outside water. This way, they can survive in an environment which is poor in oxygen.

READ more: Fishing In The Rain: How Rain Affects On Fishing?

In my opinion, there is a strong reason for fish to move to spawn grounds. Some species of fish attempt spectacular jumps to get to the nurseries.

What an incredible show of strength, speed and stamina! The Pacific salmon species like Coho, Chinook or Sockeye can negotiate their way through impossible waterfalls, for their innate desire to procreate.

Salmon are very famous for their wonderful aerobatics; other fish are also doing the same thing but in a less dramatic way. During springtime, some fish scale a height of nearly 2 metres which by any standards is commendable. 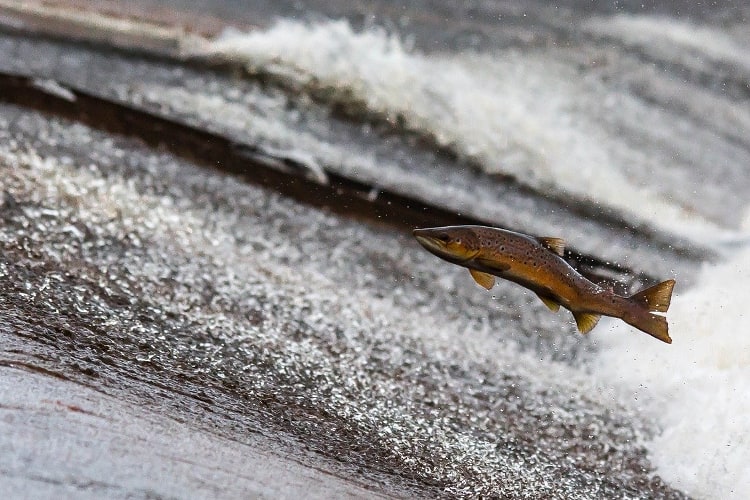 Do you want to know what my personal opinion is?

You see, some of the fish do not jump out for a specific purpose. It just happens. These fish are full of life. They are in the youth of their health. They are in perfect physical condition. They could be jumping to enjoy life to the fullest, to show it to others or just for fun.

Have you seen some kids playing in the playground? They look full of life and energy. The fish are showing a similar enthusiasm, and the force of life is making the fish jump on its own. The sheer joy of life and well being.

READ MORE: Your Ulitimate Guide to Fishing with Kids
READ MORE: Bobber (Float) Fishing: How to catch fish with it?

In the Gulf of Mexico, certain species of fish get together in big schools. The gathering happens during a particular period of the year. The fish throw themselves in a series of jumps in the air. The male and female fish both jump together. Perhaps they are looking for a perfect mate for some romance.

Scientists observed that these places were like nurseries of certain species. They discovered a lot of young fish feeding themselves near the jump area. When both male and female jump, they do so to indicate that the fish of same species are nearby. The gathering gives rise to a cascading effect of more fish coming to the jump area and starts participating. And the romance begins.

Here we are sharing with you a small video of jumping fish in slow motion, and we have tried to understand one of the basic reasons.

Let us watch this amazing video and try to decipher this peculiar behaviour of the fish.

About the Jumping FISH Video:

The fish in the video are juvenile fish which can jump out of the water to catch the small prey. The adult fish is much bigger than the tank and can catch much bigger prey like birds, bats, snakes etc. Here they are shown catching the small crickets.

These fish have evolved, and their mouth opens like a drawbridge. The bubbles generated are very big. The fins in their body have evolved in such a way that they help in leaping out of the water to catch the prey with quick reflexes. It all happens in a matter of seconds.

We have shown the action in slow motion to make you understand the dynamics behind their spectacular jumps.

READ MORE: How To Fly Fish For Trout, Bass & Carp | Learn Fly Fishing
READ MORE: What is the Healthiest (and BEST) Fish to Eat?
READ MORE: TOP15 Fishing Spots around the World in 2020!

You have seen the logic for the fish jump out of water.

Why do fish jump? Are jumping fish doing it for the sake of it, or are there any logical reasons. We have tried to give reasons based on observations. Scientific explanations do not back all these reasons. Some of them may be just guessing work.

Till then let us enjoy the splendid behaviour of the fish.